Kathleen purchased  “Sinbad of Abersoch” in 1984 coinciding with commencing practice as an associate Marine Surveyor . Sinbad was spotted, oddly, in a sales paper called “Exchange & Mart”  (better known at that time for “cheap jalopies”) in the boats for sale column. The advert ran something like “see the world, live aboard; Alan Buchanan 11ton cruiser-racer 38ft Mahogany on Oak Lloyds 100A1 – in class.

At the time, wooden yachts were about at the bottom of their desirability spiral. The new material, GRP,  had well and truly got going, timber prices were already sky high and yard labour prices were going through the roof as well. The old experienced boatbuilders were all retiring and going to the great boatyard in the sky, no new wooden boatbuilders were being trained and the “boat builders university craze” hadn’t even been thought of.

Sinbad’s purchase price in 1984 was in the region of £13,000 and the boat was located at Clynder, on the Gareloch. It was decided to go and have a proper look and a trial sail to be followed by a brief survey with the intention of sailing the boat back to Swansea before the onset of winter. On arrival at the boat she was to be seen sitting on her mooring out in the loch. One look from the shore was enough and a seriously stormy (yes in more ways than one) 14 year relationship began.

Kathy Kilbey has always been a keen sailor having  competed in most of the major RORC races over the years, including the Fastnet race in 1989. click here for pdf downloadable presentation  Sinbad’s Fastnet 1989  Also there is now a downloadable pdf telling the maintenance “story behind the story”  Sinbad Maintenance 1984-97

As can be seen from the pics below, keeping a timber yacht of any stature to Lloyds 100A1 classification is a major committment in both time and money. The vessel has to be dismantled for a “Special Survey”  by a Lloyds Register Surveyor every four years and there is an intermediate classification survey every two years.

Interestingly, the classification does not (in our experience) always ensure that the vessel is seaworthy, merely that it conforms to Lloyds rules as to construction. One may well ask, what is the point of remaining in 100A1 class !!  One may also ask how-come all these graving pieces had escaped the attention of previous Lloyds surveyors!! 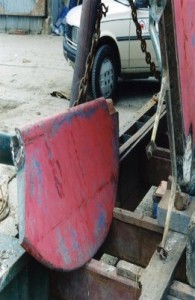 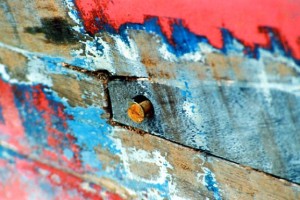 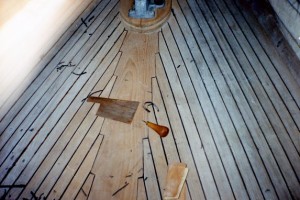 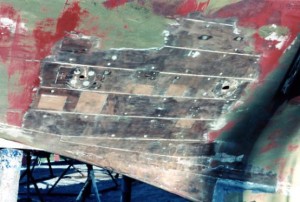 Every 4 years the Rudder Stock required inspection, necessitating dismantling and removal of the Rudder Blade. Likewise a selection of hoodend fastenings had to be removed for inspection as above. Regular attention to the deck seams was also necessary, due to over-scrubbing of the decks iduring past ownerships. 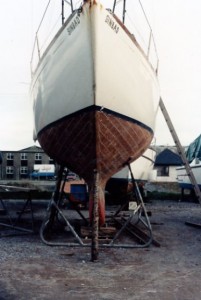 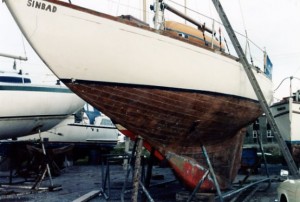 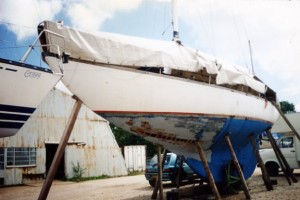 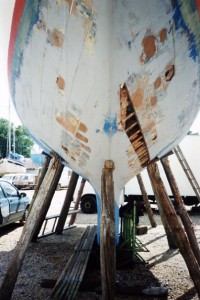 Lots of little “graving-pieces” had also been glued over soft areas around fastenings below the waterline. This damage had been caused over a number of years, by electrolysis; ie currents flowing between the noble metal (bronze and copper) fastenings and the less noble ironwork around the engine, as well as the base of the alloy mast. This problem is noticeable in most of the Buchanans and similar yachts of the late 1950’s and early 60’s period. One (well known) slightly larger Buchanan had to be almost completely re-planked in the early 1990’s and she was planked in Teak as opposed to Honduras Mahogany. Another contributory factor was the electro-mechanical wind instrumentation of the period and the many electrical leakages from this equipment. 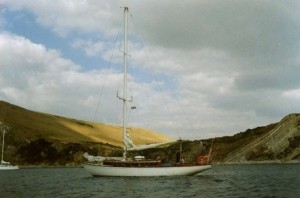 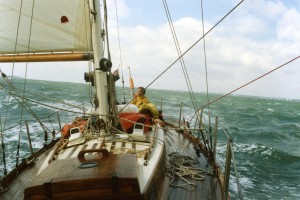 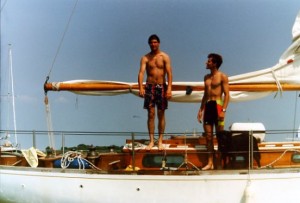 From 1988 to 1992 “Sinbad of Abersoch” was actively campaigned in RORC Ocean Racing events, including  the 1989 Fastnet Race. At that time there were only a handful of 1960’s Class ll racing yachts in a competitive enough state to race, the most successful of which was the Jackson’s “Sunstone” ; a Sparkman & Stevens timber boat which usually arrived well in front of everyone else –  including many of the (then modern) “plastic” fleet  of Sigma 38’s etc. 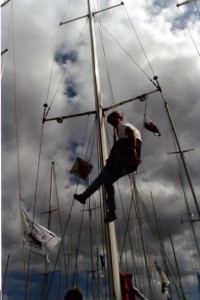 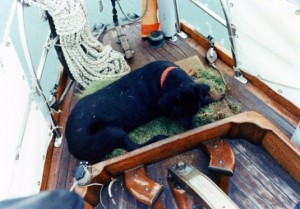 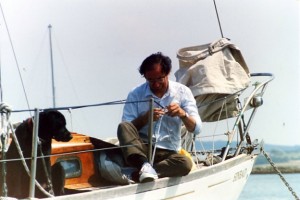 Black Labrador “Chocky” joined the ship as a 3 month old puppy just after the storm of October 1987 severely damaged Sinbad. He stayed with us until well after the boat was sold, finally going to the great Labrador kennel in the sky in October 2001 aged almost 14. 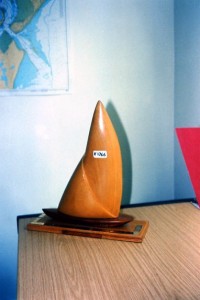 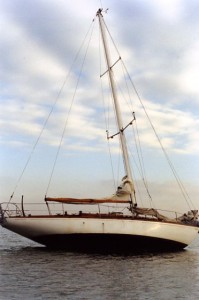 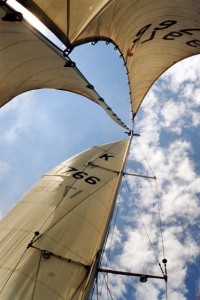 We also had some interesting and exciting moments during that period…          like the day we met The Queen unexpectedly!! 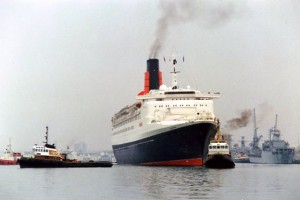 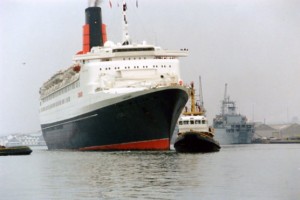 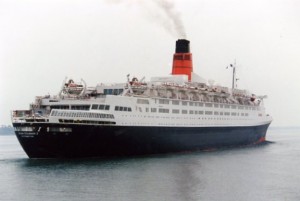 Continual maintenance during the 15 years of KJK’s ownership kept “Sinbad of Abersoch” in Lloyds 100A1 Classification. However,  rising costs in the late 1990’s resulted in a decision to sell the yacht and she went to what should have been a “Good Home” back in North Wales at her home port of Abersoch.  Unfortunately Sinbad has now dropped out of 100A1 class and has been through a period of  “modernisation” by recent owners.  These “improvements” incuded the fitment of an unsuitable and very heavy modern engine,  modern Lewmar chromium plated winches, and (total heresy) roller headsail reefing.  None of these changes will have improved Sinbad’s exceptional sailing qualities and they will have detracted considerably from the boat’s hitherto total originality, but (one supposes) they will have made her easier to sail for modern crews.     More information about Sinbad and Kathleen Kilbey.

Work in progress  come back soon