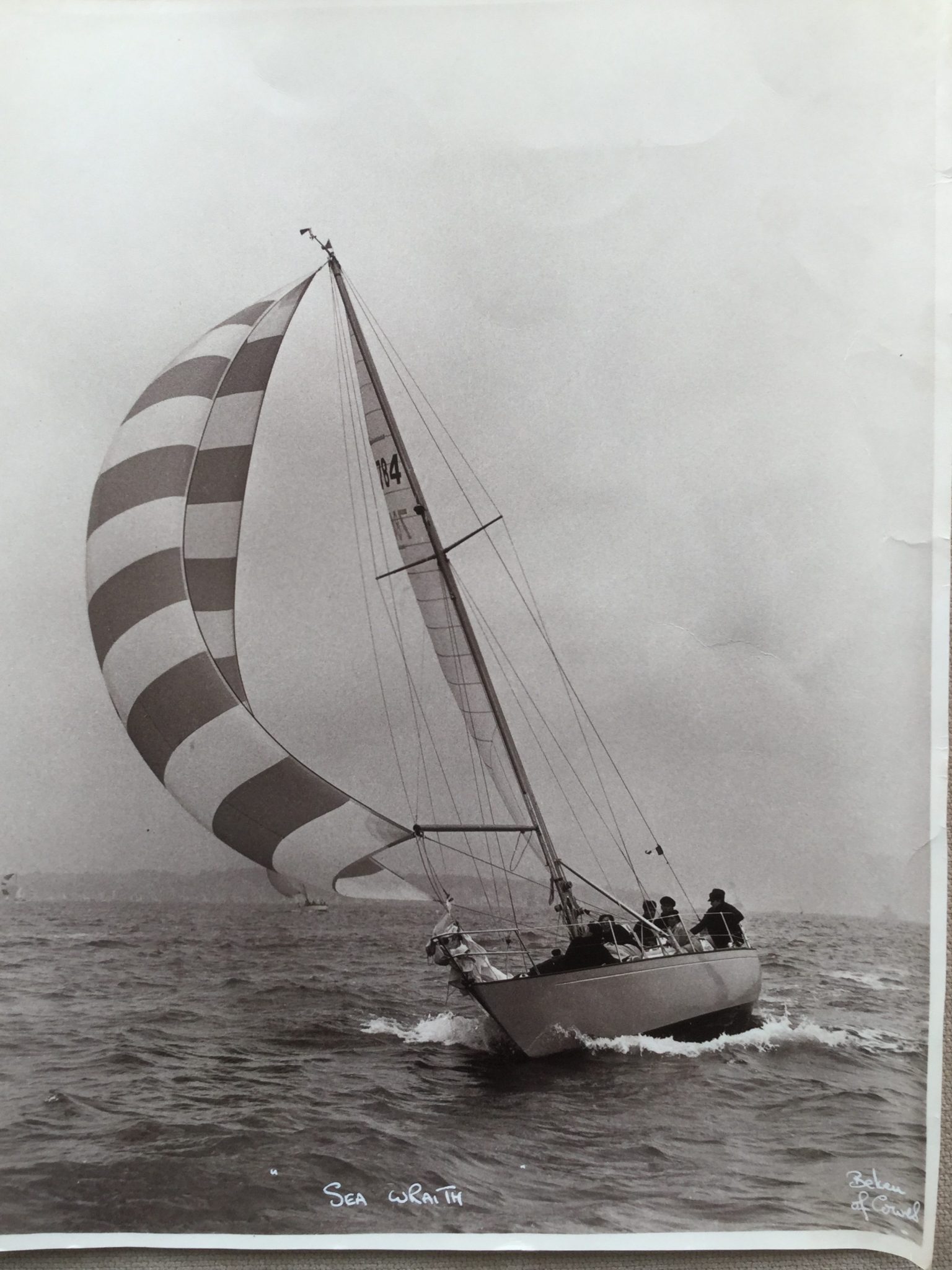 Designed by Kim Holman and Built by Nicholson & Marshall (Yachthaven Ltd) of Hayling Island
“Severn Wraithe” is an interesting little piece of Kim Holman history, and also a piece of Royal Navy history.

Built by Nicholson and Marshall on Hayling Island in 1968-69, she was originally ordered by the Royal Navy Portsmouth Command and Christened “Sea Wraith” by HRH Princess Anne. She then appears to have been Registered on Part 1 of the British Ship Registry briefly as “Sea Wraith ll“. Official Number 338605;  No. 113 in 1970, at Portsmouth. During this period HRH Princess Anne sailed on her and we understand, was in fact on board when the black&White picture was taken by Beken of Cowes.  In 1971 Sea Wraith was  transferred to HMS Mercury, and was renamed “Meon Maid lll“. She then had  an interesting and active 15 year career with the Royal Navy, teaching matelots how to sail a “proper yacht” right up until 1985.  During this period she travelled widely around European coasts, the Atlantic and the Med  it appears.

The above period of the boat’s history is still being worked on and anyone who was around in the Navy at Portsmouth or at HMS Mercury at that time (1970-1985), please do get in touch. (former Royal Navy personnel, in Particular!!)  The boat must have been popular, to have been retained by the Navy for some 15 years, at a time when yacht accommodation and “conveniences” were developing rapidly into the modern “floating Caravan” syndrome.

Following her naval career, the boat became “Tywi Maid” for quite a number of years and lived down in Wales, the Med and the Adriatic, before returning to the UK and being re-christened “Grace” (It appears the new owner at the time, couldn’t quite get his head around the Welsh name and is believed to have said “ohh s…d-it, I’m calling ‘er Grice”! )

From that point, the yacht’s behaviour appeared to have been thoroughly dis”Grace”ful, with engine problems, handling problems, gear failures, leaky decks etc etc. Since taking over stewardship of this very classy lady, Kathy Kilbey decided to re-christen her “Severn Wraithe” (the original name of Sea Wraith having been taken, on the part one register) and she has now been returned to the full British Ship register, port of Cardiff  (June 2016).

Interestingly, the lady is once again behaving herself –  she underwent a full de-naming including full propitiation of the gods of the Sea (with due libations), which has been followed  by a re-christening in her new part-one registered name of Severn Wraithe, port of registry, Cardiff.   Based at  Lydney Harbour on the River Severn “The Wraithe” is sailing to and from Bristol Channel ports very regularly.

The Northney 34 is in fact a plastic replica of Kim Holman‘s own very successful Wooden Ocean Racer called “Shaker“, built in 1965. So I suppose one could call these Northney’s  “Plastic Shakers” – if you dare !!  Once you can sort the weather helm they are very smooth and fast however and an ideal Bristol Channel windward boat. (Cardiff Outer Wrack buoy to locked in at Lydney in 4 hours a few weeks ago.)

We have now managed to identify most of the 20 or so Northney 34′s built before the moulds were accidentally destroyed. Many of the C.R Holman designed Northney 34 class yachts, including Sea Wraith, were built by Nicholson & Marshall on Hayling Island

If you own or have previously owned or sailed on one of these boats please do get in touch with me (Kathykilbey).  I am aware that several boats are on the West coast of Scotland and would very much like to contact these owners.

The original Names of the Northney 34‘s built (from LLoyds Register of Yachts 1971): (there may well be others still unidentified) are listed below.

Sea Wraith (Meon Maid III);  Dingbat;   Ballerina of Mizzen (Ballerina of Torbay);  Hiboux II;  Sannu-Sannu;  Scintilla of the Sea;  Spellbinder;  Symbol of Lleyn;  Lauric;  Marazan; Mar Azul;  La Bamba of Beaulieu;  Osiris;  Silver Tempest;  Tarantara;  Streaker;  Dervish; and of course Kim Holman’s own original wooden yacht “Shaker” of 1965, from which the original mould and plug were designed.  There are several of the yachts “missing” still, so any one who owns or sails a Holman 34 of any kind please get in touch with us.

This will be a work in progress, so please watch this space.

I have a feeling this overall project is going to be a long job, as I am intending to gradually restore the boat whilst keeping her in commission all year round and sailing her as much as possible. So for the moment, excuse the varnish… or lack thereof!!

Come back and see us again soon  – or send me an email and I will send you an invite to join our facebook group at https://www.facebook.com/groups/severnwraithe/