This particular yacht had been lurking in an Inland Waterways Marina for quite a number of years and we therefore took particular care to check on areas of the hull where decay would be most likely.  The boat had been built on the Clyde by a well known pre-war (WWll) builder and was found to have been built like the proverbial brick…….  Probably one of the best built boats ever surveyed by KJK irrespective of time or place.

This Survey was carried out in the depths of winter at a traditional Thames Boatyard  on Laleham Reach.  I have always thoroughly enjoyed working on Wooden Boats and being in a traditional yard for a couple of days, therefore being surrounded by “Dunkirk Little Ships” was a bit like going to the wooden boat Marine Surveyor’s Mecca!!  (Oh well, each to their own, you might well say!!!)  My belief is that one does not “Own” a Classic Wooden Boat, one is simply the trustee for the time being and one has a duty to maintain and preferably improve the boat during the stewardship period.

Description:  A fine example of a late 1930’s “Gentleman’s Motor Yacht”.  The vessel can also be rigged with steadying sails when on open sea passage

The survey was carried out in order to establish a Valuation for Marine Insurance and to identify any major defects requiring attention during her coming refit. 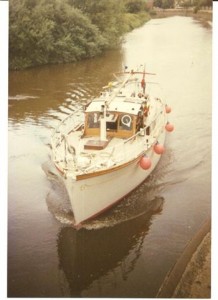 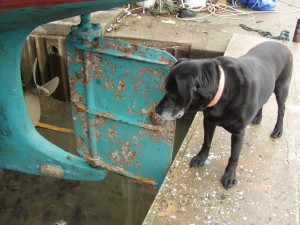 On the River before Survey   Assistant  Surveyor inspecting Rudder 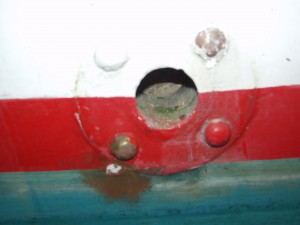 The outside of the hull was inspected on the yard slipway using the time-honoured techniques of powerful hand-lamp, hammer, mallet and probe. (No-one has yet invented a more effective method of checking the soundness of a timber boat hull). The pictures below show some of the hull external areas requiring maintenance attention. 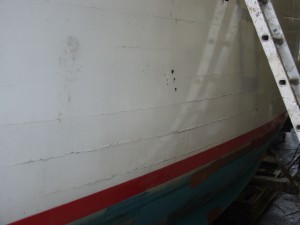 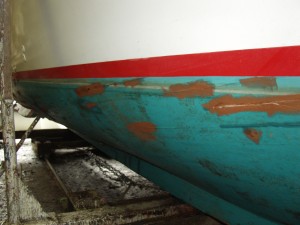 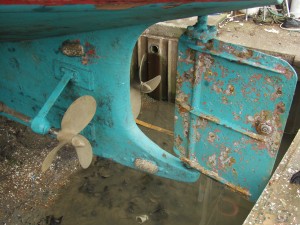 The pictures above show how some seams both above and below the waterline had opened up to some extent. This was primarily due to the long-keeled hull being lifted in slings and craned out of the water on to a truck. Not a very kind way to treat a venerable old lady!! ( I certainly wouldn’t like it anyway!)  Wherever possible this kind of very long narrow hull should be pulled ashore on a slipway trolley in the traditional manner and not craned. (see video below, the launching of Shianne)

Another factor contributing to the caulking compound standing proud of the timber in many of the seams in this boat was the previous insertion of modern synthetic caulking compounds, probably during a repaint at some time.  These modern compounds are impervious to air and water and consequently become detached quite quickly from the “organic” timber, which needs to breathe and expand and contract. In any case this hull was originally splined ie, a thin strip (a spline) of hardwood is glued tightly in the seam which is accurately routed-out  to take the spline.    Alternatively Caulking cotton, followed by a mixture of red-lead and linseed putty should alwways be used for seams which were caulked originally.

When surveying this kind of classic wooden yacht, whether motor or sail, one gets a “feel” for the vessel after a few hours of poking and probing within and outside the hull. A perceptive surveyor will be able to  “get inside” the minds of the yard team (who would have taken several months to complete such a vessel. With this boat, there were no shortcuts taken and no expense spared either in money or material quality.

A considerable amount of historical research was carried out on the provenance of the boat because it was believed that she might have been a hitherto undiscovered “Dunkirk Little Ship”   However, no connexion was established in that context although the boat was built at exactly the right time to have been commandeered by the Royal Navy for the war years  (probably she would have served as the Admiral’s personal transport)!